We had a wonderful work day on Saturday and a lot got done. New ceiling fans were installed in the covered area where the grill is located. Two benches got painted. The new swing is now up, swinging and tested by yours truly. Grass cut and raking done. A couple more dock boards replaced. Bathrooms cleaned and all floors swept and mopped. And I am sure there were other things done that I did not see. Unfortunately the wind did not show up until Sunday so we had no racing but you can always have it all. Thanks to all that showed up for the work day! 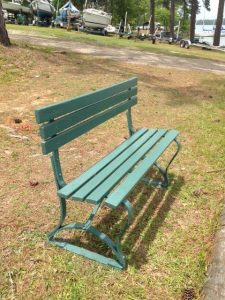 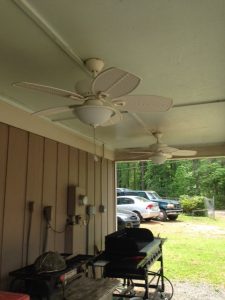 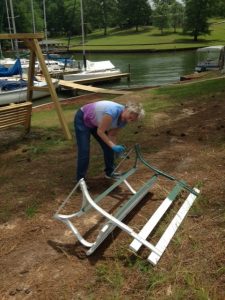 We had a great day at our club this past Saturday. The wind was blowing and four boats went to Hauk’s reef. What a beautiful day to be on the water. It was the first time our grandson had been in a race and he loved it. Cary did a wonderful job decorating the club with an April Showers, May Flowers theme. Thanks to her for time and effort spent; she has such talent! Everyone gathered in the evening to assemble some outstanding Shish Kebobs and the grill looked phenomenal when loaded up. If you could not make this year’s Shish Kebob, you have to be sure and make next year’s! END_OF_DOCUMENT_TOKEN_TO_BE_REPLACED

If you missed our Spring Meeting you missed some good stuff. I had wonderful fun where decorations were concerned so there was that. Thanks go out to Lynnrenee, Mike Barr and Mike Wisdom for all their help in setting up things. Ken put his cooking skills to use yet again providing corn beef and cabbage which was excellent and his Sheppard’s Pie was phenomenal. If you ate it that night you would know. Many asked for his recipe but as those close to Ken know it is a skill that cannot be contained on a piece of paper. Never the same always delicious. It is an artist thing. Hope to see you all at our next event which will be April 21st and is wide open for anyone to host so get in touch with Lynnrenee or me. Remember you can do as much or as little as you like when hosting an event. We will have your back!  END_OF_DOCUMENT_TOKEN_TO_BE_REPLACED

We had a great turn out for the chili cook off this weekend with a total of 6 pots of chili. They were all very good and Susan Morris won the prize. Bill gets a mention since it was his recipe but he was too busy racing to cook. Good job Morrises! I believe we had around 26 people present. Everyone recited their recipes and it was very interesting to hear. Thanks to Lynnrenee for getting the ball rolling and for everyone else who pitched in to get things set up and cleaned up. Great fellowship. I have attached some photos. (click here)

We also had some awesome wind in which to race. We held two races with 5 boats. What a wonderful day at our club.

Hope to see you at the next event,

The 2016 club Christmas party is scheduled for 5pm on December 10th.  Please RSVP using the email from Jennifer, or if you didn’t get an invite email, please contact her directly.

Save the date! The OSYC Fall Membership meeting is scheduled for November 12, starting with dinner at 6pm. Watch for RSVP information by email.

ATLANTA – Oct. 13, 2016 – Georgia Power announced today that the 1,000 foot-tall stack at its retired Plant Branch will be removed by controlled demolition on Oct. 15, 2016. The company is working to conduct the demolition shortly after daybreak, but has secured a window of time between 8 a.m. and 1 p.m., based on weather and safety conditions. The stack demolition was postponed from this past weekend, due to Hurricane Matthew.

Removing the stack is the next step in the dismantlement of the retired power plant, which served electric customers reliably from 1965 through 2015.

Immediately prior to the demolition, local law enforcement and DNR will establish an Exclusion Zone (see attached Exclusion Zone map) to ensure a safe buffer around the site. These agencies, in cooperation with the DOT, will also temporarily stop vehicle traffic on U.S. Highway 441 while the demolition occurs. All boat traffic will be prohibited from entering the Exclusion Zone on Lake Sinclair at that time.

Safety is Georgia Power’s top priority during removal of the stack and the company reminds residents to be aware of the demolition and to not stop on public roads or attempt to access Georgia Power property to view the demolition. The company is taking all necessary steps to ensure safety while minimizing inconvenience for neighbors, including employing rigorous dust-suppression measures to limit the spread of dirt and concrete dust. The company will assess neighbors’ outside docks, walkways and furniture on request, to determine if surface dust removal is warranted. Residents may contact Regina Linch at (706) 484-7206 with any questions regarding dust.

The OSYC Fall Membership Meeting will be held at the clubhouse on the evening of November 21, 2015.  The agenda will include committee reports for 2015 and election of officers for 2016.  Please plan to attend, and if you are unable to attend in person please provide a proxy to the secretary, any board member, or to any member who will be there.

Report of the 2015 Nominating Committee END_OF_DOCUMENT_TOKEN_TO_BE_REPLACED

Dear OSYC Members,
According to Georgia Power, the drawdown of Sinclair will begin about October 18 and last until about November 27.  They will not commit to exactly how the drawdown will affect the lake level except to say it will be substantially lower than normal.

Based on past drawdowns, the exact date of the start of the drawdown can begin a few days earlier and end a few days later that announced.  Also, the on top of the general lowering of the lake level there will be daily fluctuations of more than two feet.  Because of the unpredictability of the fluctuation and the potential damage to boats and docks due to tight or loose dock lines, the board is requiring that all boats be removed from their slips during the drawdown.

Slip holders are requested to have their boats out of the slips at least a few days before October 18.  Some are planning to anchor their boats in deeper water, some are trailering their boat off site, and most are planning to park on the club grounds on trailers.  Because of the large number of boats on trailers, it will be necessary for some boats to be blocked in by others.  This is an inconvenience we just have to live with. I’d also like to urge anyone who can move their trailer offsite until December, with or without its vessel, to do so.  Any relief we can get from crowding the trailers together at OSYC will be greatly appreciated.

When parking your boat please do not block the hoist or the ramp as some are planning to do bottom work during the drawdown, and we may be doing repair work on the ramp.

2.        If you anchor out, be sure you have adequate anchors, depth, and proper lighting.  Bob Horan is one of our most experienced cruisers, so he is a good resource.

3.       It is OK to use the floating docks during the drawdown but not for overnight unless you are staying on the boat.

Our OSYC calendar calls for a smoked pork roast event come Saturday the 29th. If you have ever had Ken’s smoked pork, you know the delight for the tongue. Sides and soft drinks provided. Kosher hot dogs easily provided to those upon request. Please put yourself and loved ones in the count for vittles by 3 pm this Friday. We will begin consumption of appetizers brought by any fellow members around 5 pm with dinner shortly after 6 pm. Member provided desserts can be eaten before or after, given your an adult. Come enjoy our club with good food, fun and fellowship!

Maybe the wind will blow and a sail be raised come this weekend,